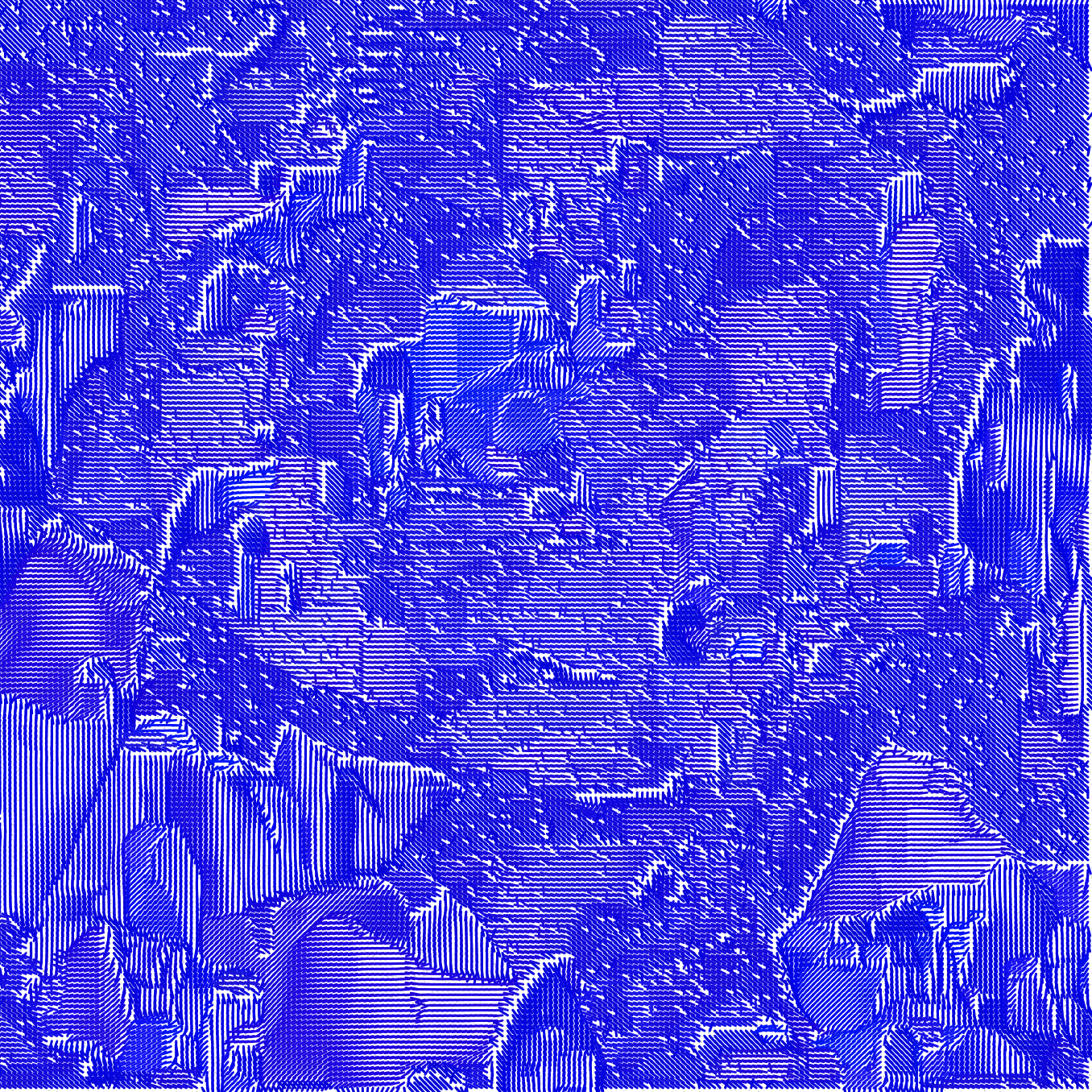 Cave Etchings are produced by a generative art system that creates line drawings that vary in angle and thickness, resulting in textures and moire patterns. The data that guides the system are the hue, saturation, and brightness values taken from unedited AI generated images of caves, conjoining an AI process with a generative art process, both fully automated.

The project will be released on FXhash on Thursday 21st July, around 18:30 CET. This page will be updated to showcase some of the mints. 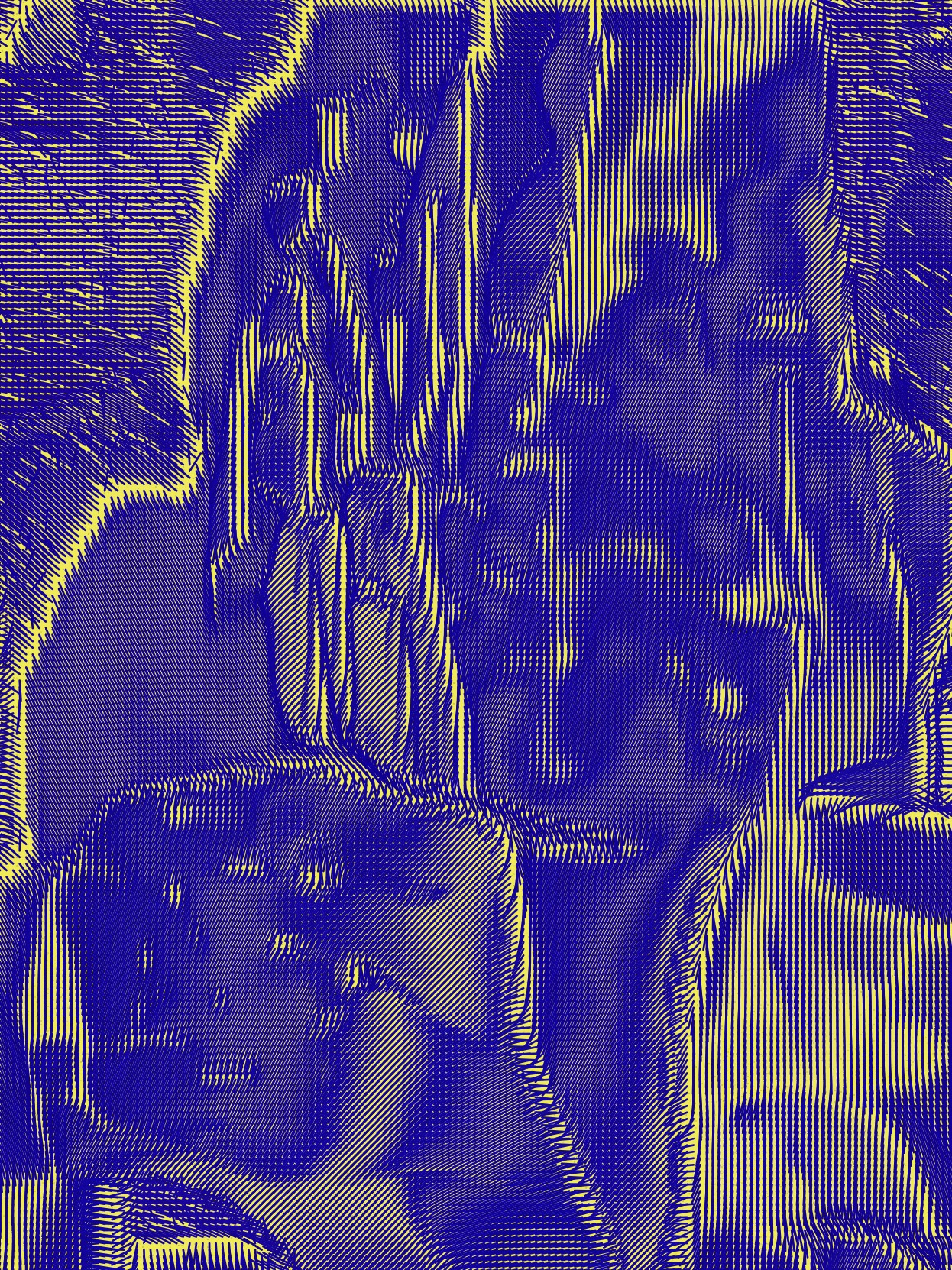 The project is not just an exercise in generative imagery, it is about seeing things the way a computer 'sees'. The original AI cave series focused on how AI Computer Vision can be tricked into seeing things appear in caves, as it was guided to identify both 'cave' and other things in the image being developed. Faces would often appear in the cave cracks, and big eyes would conversely turn into cave tunnels.

In cave etchings, we are asking a more rudimentary system to look at the caves by reading the pixel data and extracting thier hue, saturation, and brightness values. By converting that data into directional lines, we see the AI caves through the lens of this new system, often zooming in, cropping an area, and visualising the gradual changes in brightness and hue, depending on the algorithm used. 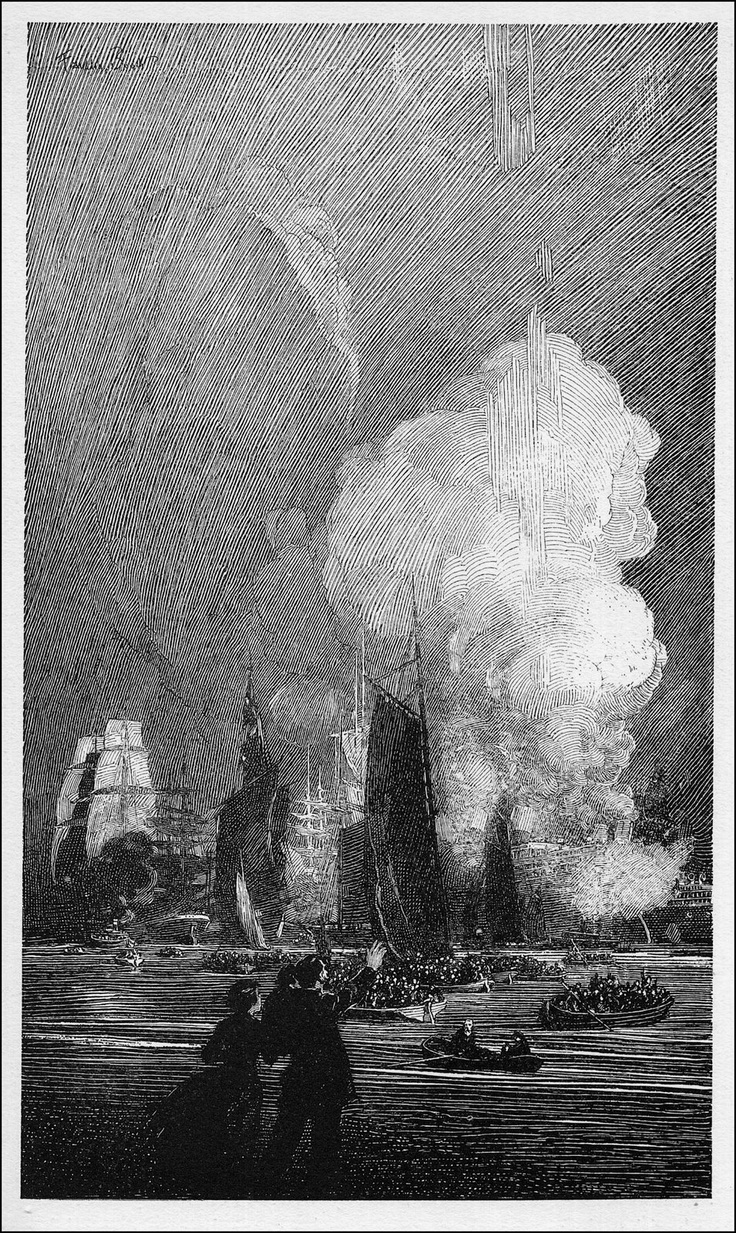 
The project is inspired by the artwork of Franklin Booth. Booth (1874- 1948) was an American artist known for his detailed pen-and-ink illustrations. His unusual technique was the result of being a self-taught artist that from a young age, copied magazine illustrations which he thought were pen-and-ink drawings, but were, in fact, wood engravings. This led him to developing a style of drawing composed of thousands of lines, whose careful positioning next to one another produced variations in density and shade.

Booth initially inspired a P5js activity for students, to encourage them to appreciate how generative art is connected to a wider lineage of art history, and consider how traditional drawing techniques could be broken down into instructions for a computer to carry out. This was over lockdown in 2020, and I live-coded a demo of how I'd approach this task. The simplest way of doing this was to change the direction of the lines depending on hue mimicing the way Booth may have suggested different textures or colours. The line thickness was easy to vary to create dark and light areas. What made my approach a little different, is that I was using an underlying grid to pull the original pixel values, and draw a tiny stroke in its place. This moved away from Booth towards a new aesthetic that was equally suggestive of digital screens and screen-based Moire patterns as explored by artists such as Nicolas Sassoon and Adam Ferriss.

As my source material, I used a GAN image created using a model available on RunwayML, and was curious as to how the two processes complimented each other. I was also surprised how this process highlighted certain areas, and suppressed others, in turn making the viewer see the image differently. 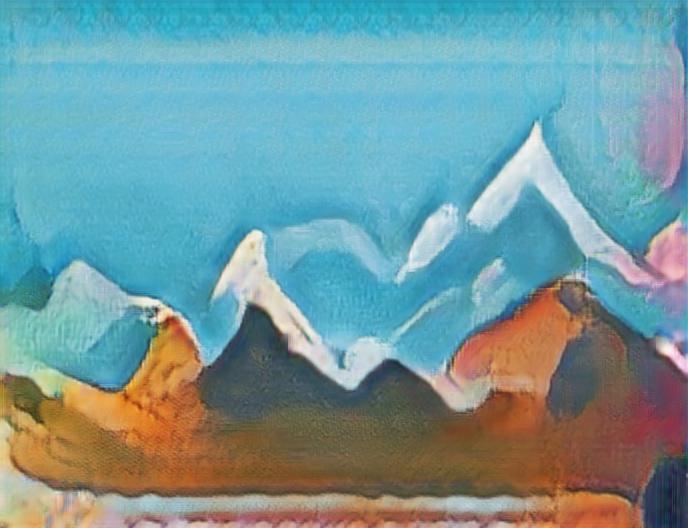 The original image was a GAN-generated painting of a mountain. 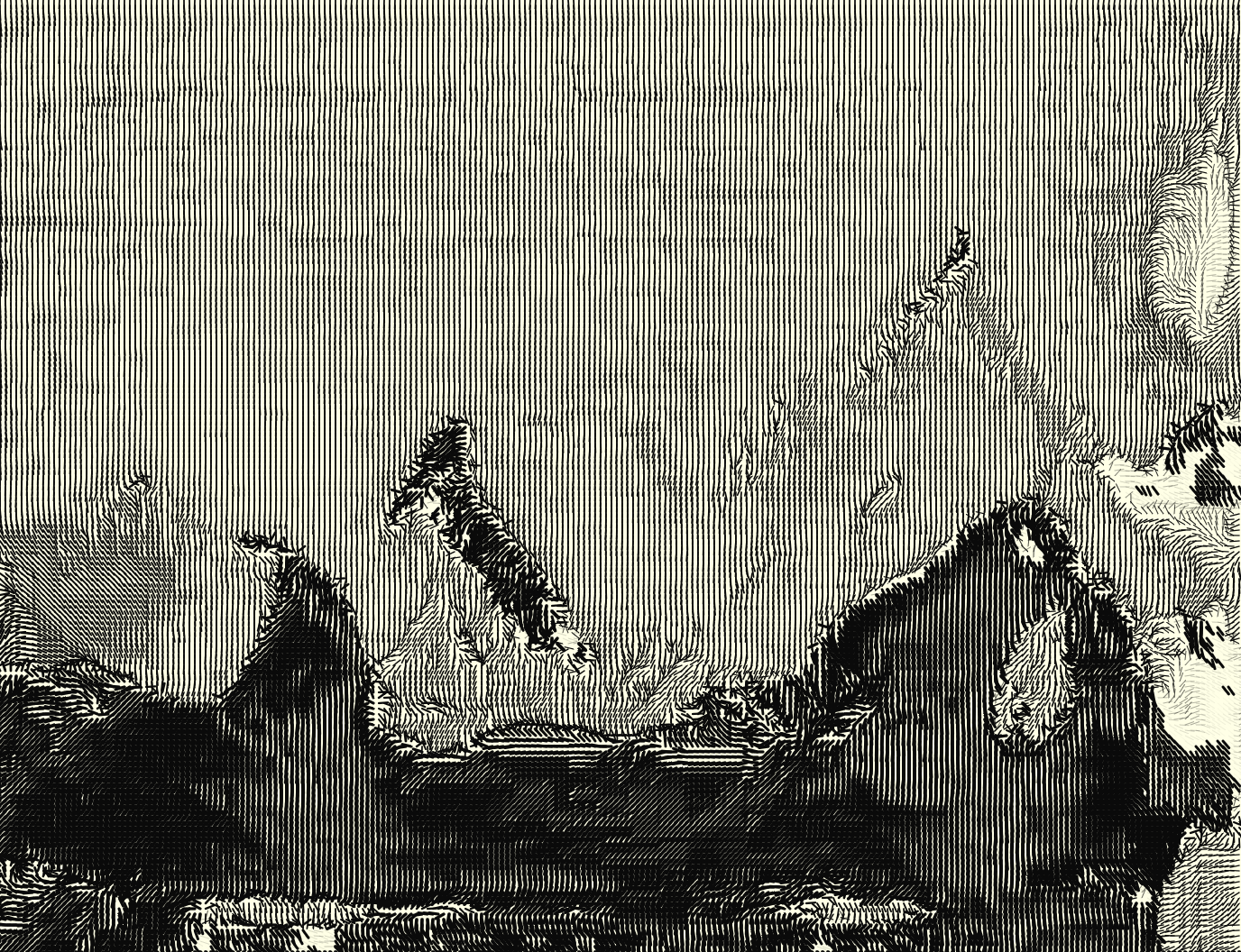 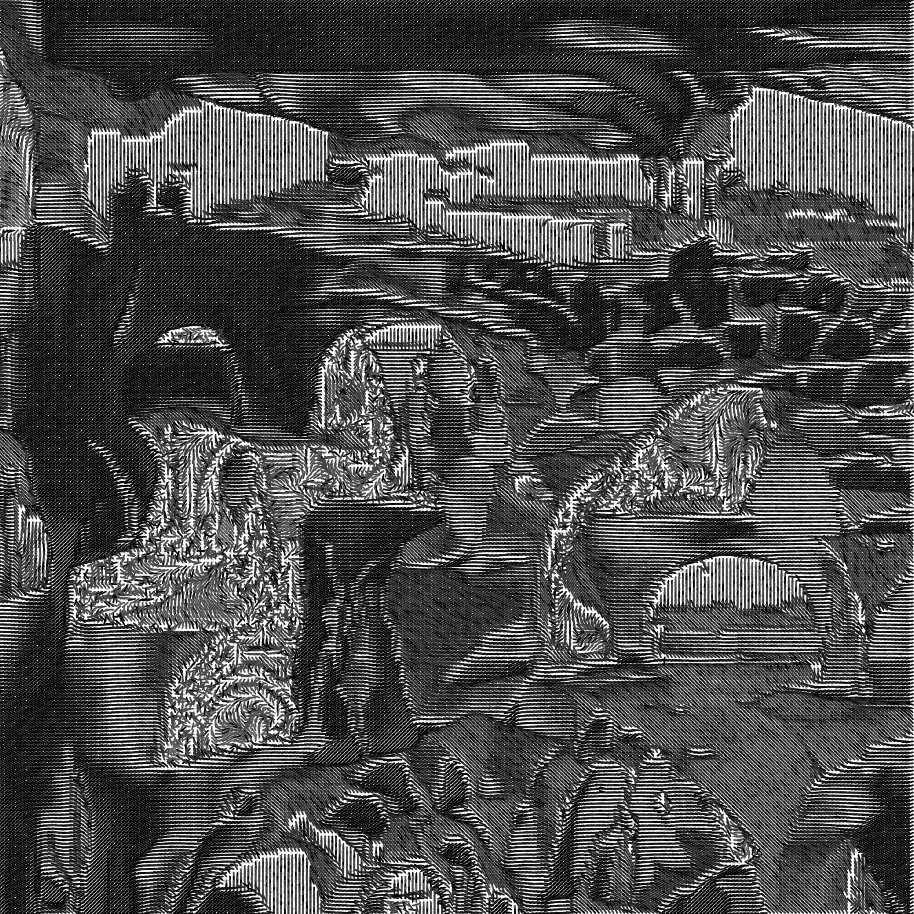 
I made further progress in 2020, using RunwayML's API to communicate directly with P5js, so that the script could call the API to retrieve an AI-generated image. RunwayML eventually closed down their API service.

Platforms such as fxhash and artblocks require the entire code to be encapsulated, which for now, would exclude most AI-image generators ( Cyril Diagne may be working on this). I needed AI outputs to be moved into a local folder for the P5JS code to imitate. I had saved all the raw outputs of the Cave Paintings project over a year - hundreds of 512px images that were entirely generated yet not selected for the series. I concluded that using this as source material would still honour the intention to be fully generative from AI to P5, with only a minor intervention of moving assets manually, to conjoin the two processes. The AI process is slow anyway (taking around 1min), so to have this done in advance leaves the generative process to run instantly in the browser at the time of minting and viewing on fxhash. 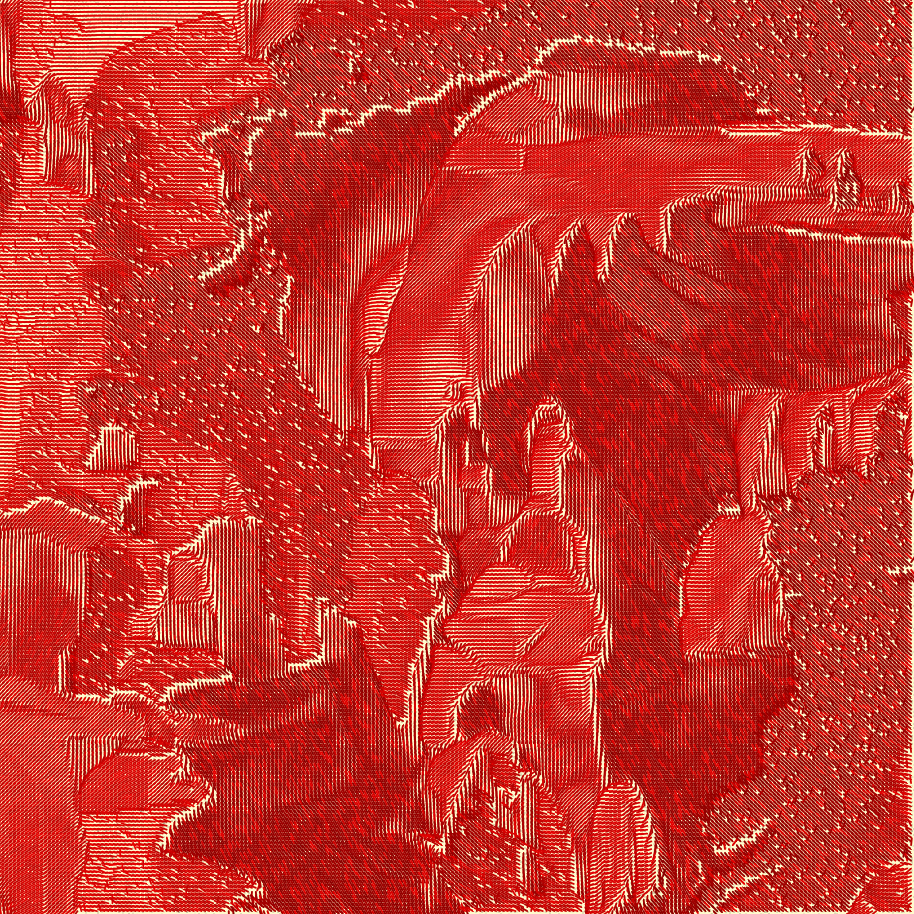 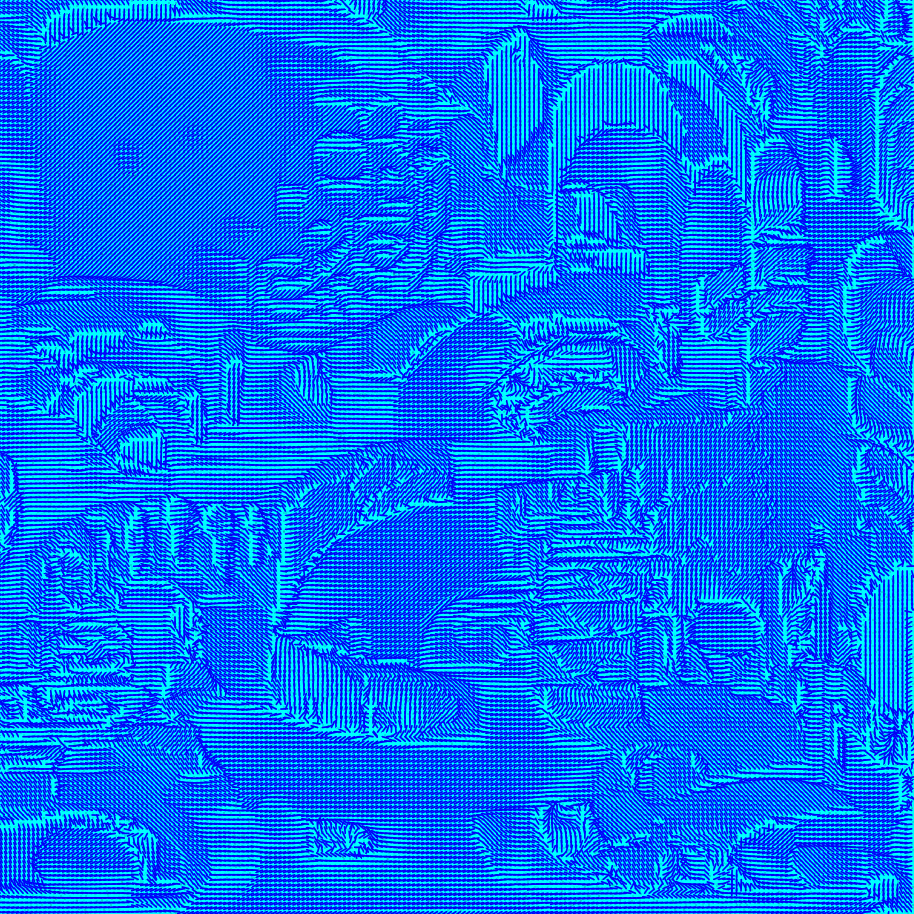 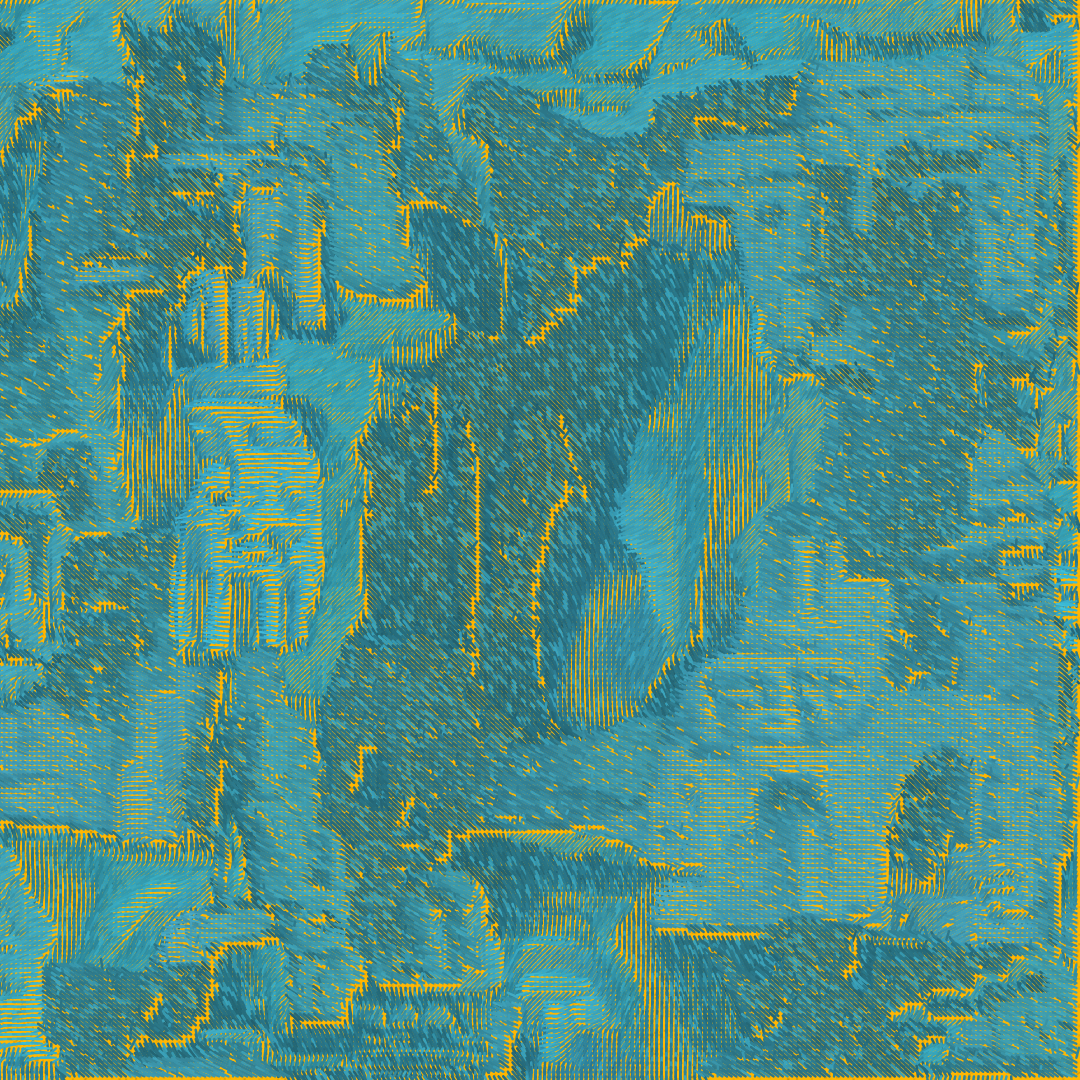 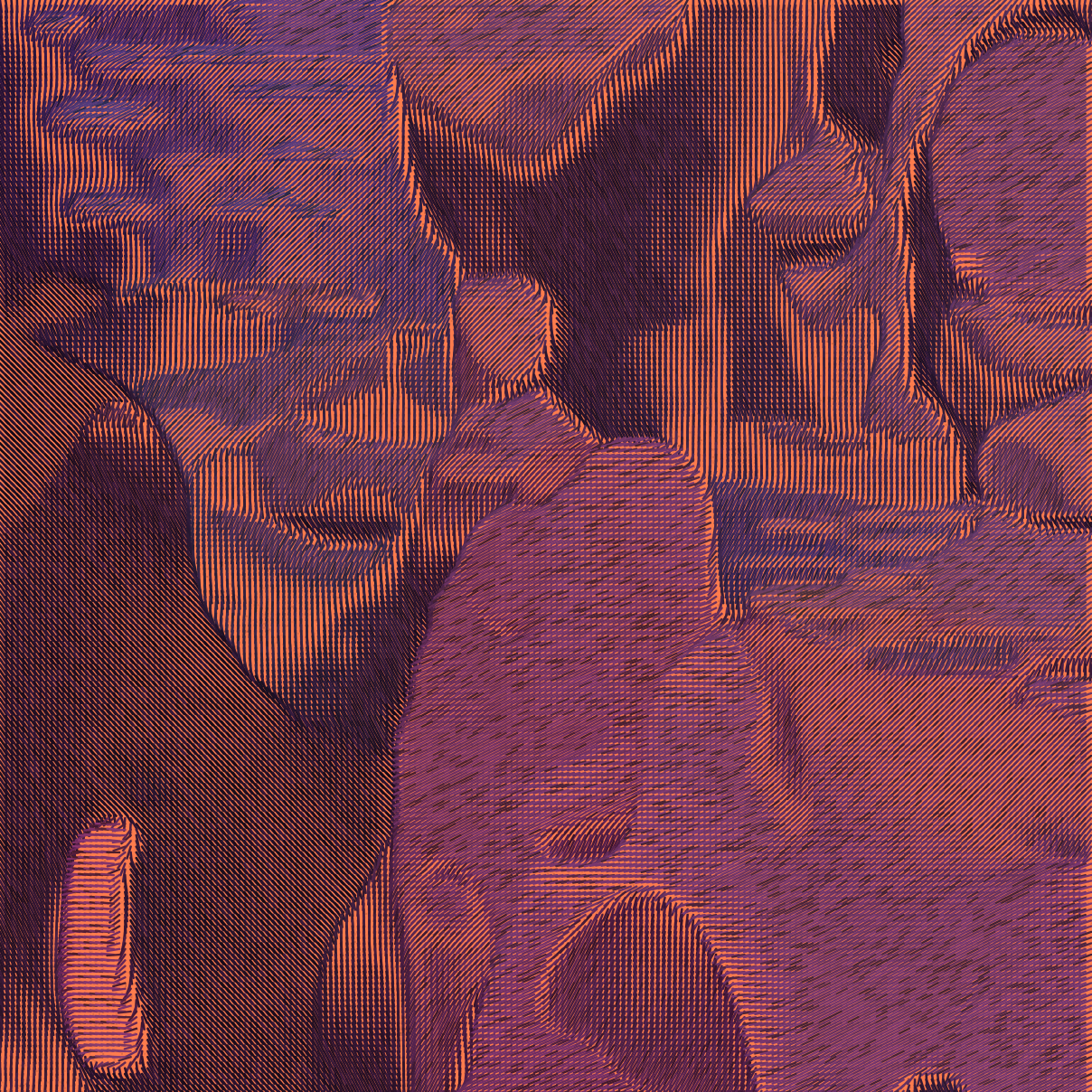 
The series also features a rare colour scheme representing a 'heatmap'. As temperatures rise around the world, the heatmap has become an iconic image of our time - a computational study of our planet that makes visible the unquestionable patterns of climate change. 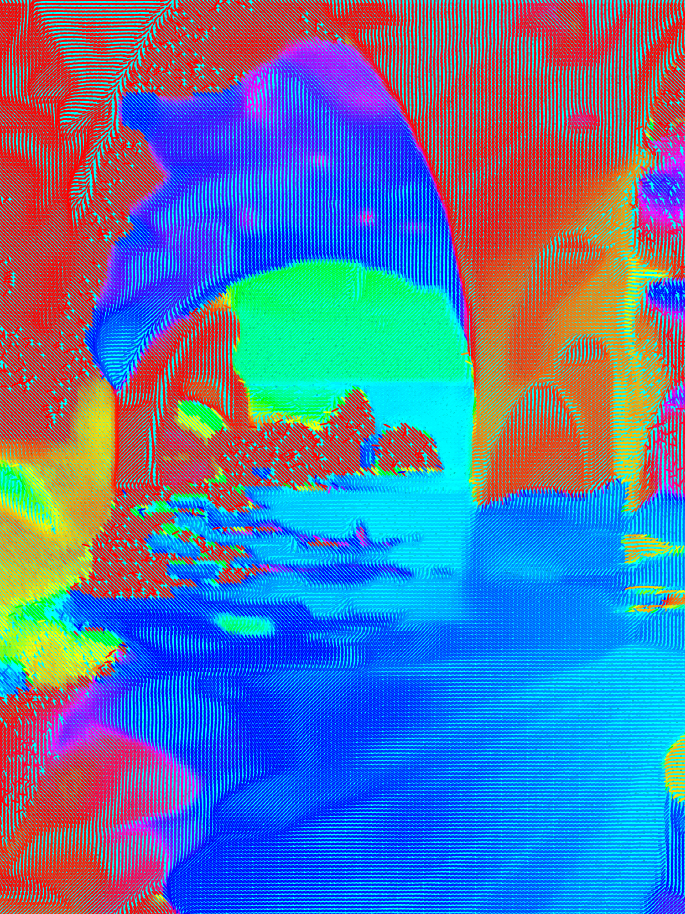